This year’s Book Week Scotland (24 to 30 November 2014) launched its programme last week – in a boxing gym, apparently. This might seem strange until you realise organisers Scottish Book Trust were using it to illustrate one of this year’s projects – a vote for the nation’s favourite characters from Scottish books. Will Harry Potter swoop to victory, will Miss Jean Brodie sweep the board, or will they both be frightened off by The Gruffalo? Votes can be cast via the Book Week Scotland website and the top 10 characters will be revealed on Friday 28 November. It all looks great fun from the photos (credit: Rob McDougall) and I’ve already cast my vote. Who for? Not telling! It’s a secret ballot after all. But do bear in mind that I am in my prime and have always been la crème de la crème. 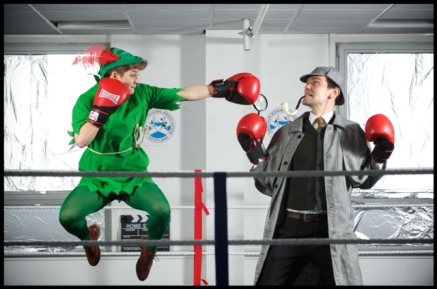 Hundreds of other, free book-related events will pop up in a diverse range of locations across Scotland, including some of Scotland’s best-loved writers and illustrators appearing at a major programme of events held in libraries, funded by The Scottish Library and Information Council (SLIC). Young children can get further into the Book Week Scotland spirit by tuning in to watch two of Britain’s best loved poets, Roger McGough and Valerie Bloom, bringing rhythm and rhyme to life during a special free author webcast on 27 November at 11.00am. Many pupils will also enjoy a personal visit from Steve Cole, author of Astrosaurs and Cows in Action, who will tour schools around the country during the week.

If your library is important to you, (and if it isn’t, why not?) Book Week Scotland is your chance to declare your feelings. Book lovers are being encouraged to take part in the Love Letter to Your Library campaign to raise awareness about the crucial role libraries play in the lives of individuals and communities. You can post, email or drop off positive stories directly to your favourite library, or pop in and read letters written by members of the public, authors and celebrities. Five large library artworks will also be unveiled across Scotland in North Ayrshire, East Dunbartonshire, East Lothian, Edinburgh and Shetland. I’m particularly keen to watch the progress on that last one, because I know the artist.

Book Week Scotland’s Reading Pledge campaign will serve as a gentle motivation to pick up that book you’ve been meaning to read, share a story with your child each night or simply pass on a much-loved book to a neighbour. Be sure to share your pledge on social media and don’t forget to carry it out during the week! You could also read some of the beautiful stories and poems in Scotland’s Stories of Home, a collection written by Scottish people,  150,000 free copies of which will be distributed throughout the week via libraries, bookshops and other outlets. Schools will also receive an e-publication featuring Scottish pupil’s stories of home.

Information on all the above is available on the BWS website – or maybe you have your own ideas? What are you and your library doing?