Last week, I had the weird experience of hearing my own voice twice. With another Glasgow Women’s Library volunteer I did an interview on Radio Scotland about the Suffragette Oak. This was planted in 1918 to commemorate women being granted the vote – well, some women: those over 30 who owned property. It wasn’t till 1928 that all women over 21 got it. The Library has nominated the tree to be Scotland’s Tree of the Year – it would be great if you could follow the link and vote for us please! The radio interview is on the BBC iPlayer – start at 1hr 49m to hear it.

Earlier in  the week, I attended the premiere of the Library’s film March about the suffragette pageant we re-enacted in the Spring. I’m interviewed in that too! So I’m quite the media star these days. Autographs on request 😉

(The background to this project is in March of Women Part 1.)

March of Women has been and gone and it was a great day! The start wasn’t promising because the rain was pouring down when I arrived at Glasgow Women’s Library for the final rehearsals at 11am, but by the time we all spilled out into the streets at 2pm it had cleared and it stayed dry until we finished.

There were three parts to the event:

In Cicely Hamilton’s 1909 Pageant of Great Women, Woman appeals to Justice for freedom and Prejudice gives reasons why she is not worthy (not clever enough, not brave enough – you get the picture). Three wonderful paid actors played these parts – Lesley Hart (Prejudice), Lucianne McEvoy (Justice) and Patricia Panther (Woman).

Woman makes her case by calling on significant women from history. In our version, Cicely Hamilton’s women had non-speaking parts and we wrote our own parts using mainly, but not exclusively, Scottish women. These are just a few – aren’t we all splendid? I was proud to represent Isabella Elder, and highlighted her contribution to allowing Scottish women access to higher education at the end of the 19th century. 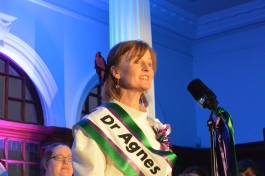 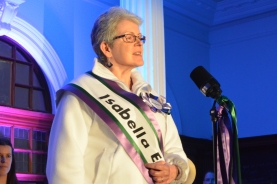 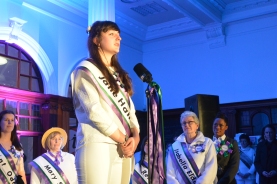 After the verdict (and it probably isn’t a spoiler to tell you that Woman wins her case) we formed a procession and marched to Glasgow Green where we were welcomed by SheBoom (a local women’s drumming troop).

Justice and Woman head the procession

Getting ready to process

3. The Event on the Green

This was the only part of the day in which I felt out of my comfort zone! Because I turned up to a particular rehearsal, I got roped into the choreographed event at the end of the March, on the old drying greens at Glasgow Green. The washing poles are still there – cue many jokes about pole dancing. My partner and I went slightly wrong at the end, but we survived. Then we had our photos taken in our groups, and it was over. I think we all felt elated that it went so well, but sad that we wouldn’t be doing it again. Still, there’s always the film to come…

Arms aloft and ready to go.

I seem to be amusing Claire behind me!

Justice and her train bearers

All photos by John Marsh, who got himself a great seat right at the front. Thanks, John!

About 18 months ago, I joined a group at Glasgow Women’s Library called Drama Queens. We met at lunchtime or in the early evening and read plays from the library’s collection. One of those was A Pageant of Great Women, written by Cicely Hamilton in 1909, in which Prejudice puts the case against women’s suffrage and Woman rebuts his arguments with examples of great women from history. Now GWL is putting on its own version on 7th March (the eve of International Women’s Day), revised and updated with historic Scottish women. I’m proud to be representing Isabella Elder in this March of Women.

The day itself will merit its own post, but there has been an enormous amount happening in the meantime. Workshops, for example: research / writing workshops to create lines for “our” women and craft workshops to make banners, sashes and rosettes (being hopelessly ham-fisted I’ve opted out of this bit). A lecture (below, left) by Katharine Cockin, Professor of English at the University of Hull and author of Edith Craig (1869-1947): Dramatic Lives – Edith was the director of the original performance. Katharine explained that suffrage supporters in the arts were encouraged to use their expertise, resources and contacts to help spread the word, and in the period 1905-14 many women wrote a play, a poem or a short story, for the first time. Pageants and public spectacles had very specific meanings at that time, and I also found Linda Fleming’s article in Women’s History Scotland helpful in understanding that. 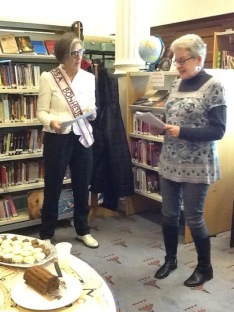 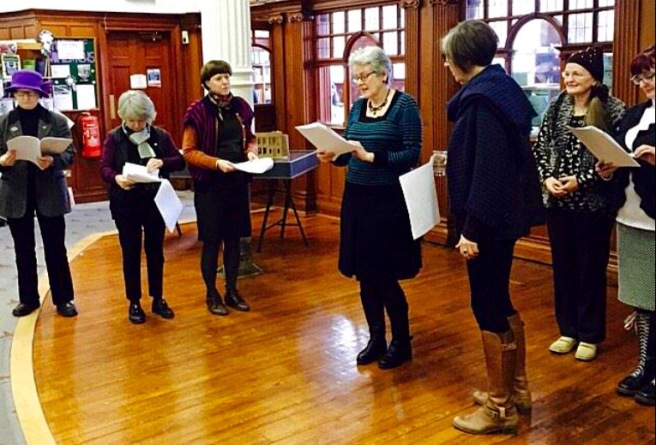 We had a Christmas party at which I did a bit of play-reading with Dr Anna Birch of the Royal Conservatoire of Scotland (above, right). Anna is March of Women’s Director – she has already directed A Pageant of Great Women, in Hull in 2011 so we are in experienced hands. The third photo above shows rehearsals beginning. These will culminate in a dress rehearsal on Friday 6th: we’ve all had to find white clothing which has not necessarily been easy!

Finally, I spent a very cold couple of hours last Friday in Glasgow Necropolis, where Isabella Elder is buried, being filmed talking about why I chose her. Some of that might make it into the documentary which is being made about the event. I’d like to say come and see us next Saturday, but the pageant is a sell-out. However, you can join us at 2pm outside GWL’s doors as we process to Glasgow Green (details via link in first paragraph). And if you can’t do anything else, please keep your fingers crossed for a dry day!